An example of London new builds prone to overheating.

Last week The Chartered Institute Of Building reported that a rising number of new builds were being affected by overheating issues, particularly during the Summer months. The survey revealed that of 1,005 Londoners questioned, residents in newer homes were affected significantly more by overheating problems compared to those with older homes.

Furthermore, the survey unveiled that a staggering 83% of Londoners suffered from an 'uncomfortably hot home this Summer,' with only 13% stating 'they had never suffered from their home overheating.'

In fact, more than half of those interviewed with an 'uncomfortably hot house' said they'd be woken up at night due to the heat, and 31% explained they felt tired or unwell as a result of the rising interior temperatures. As you can see, these results only emphasize the negative health implications associated with the overheating of modern properties and highlight the demand for these issues to be effectively solved.

Large expanses of glass can cause an array of problems such as overheating and glare.

Barny Evans, an energy and sustainability expert at WSP:Parsons Brinckerhoff, believes that building regulation needs to change in order to adapt to London's rising temperatures. Barny explains, "avoiding overheating is becoming as important to some people’s health in southern cities as beating the cold, and Londoners will continue to suffer from gradually increasing outside temperatures whilst being ever more likely to live in hotter new homes or flats."

Barny continues, stating “it’s startling that already 8% of those suffering from overheating have had to install their own air conditioning. 72% opened their windows to cope but in the future this won’t help and isn’t always an option. If building design and regulations aren’t changed now the impact on health will worsen, productivity will reduce, energy consumption will increase, and the long term value of homes will be affected."

David Bownass, building services director at WSP:Parsons Brinckerhoff, believes that higher levels of insulation in modern houses is causing this excess heat. He commented, "newer homes and flats are better insulated to cope with cold weather, but are consequently hotter in summer. There are a number of solutions available from; secure natural ventilation, external shading/shutters, clever window design and thermal mass in walls. In the future predicted warmer temperatures will force us to use air conditioning, so we should be designing buildings now to use, or at least allow affordable retrofitting of these systems.” 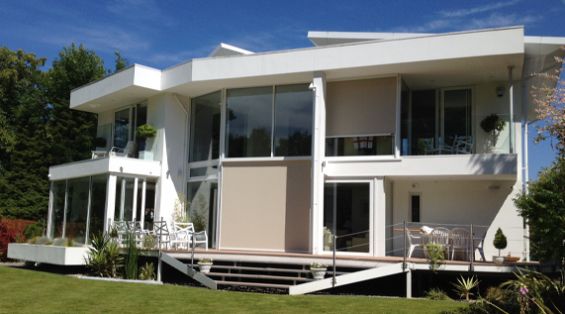 An example of our external roller blinds that block up to 96% of the sun's incoming rays.

As David mentions, the installation of an external shading solution, such as external roller blinds, presents an excellent solution to the problem, and is much more environmentally friendly and sustainable than an air conditioning alternative.

However, idealy it's important to consider the possibility of solar shading applications, such as blinds, before the building is constructed, rather than afterwards. If this isn’t discovered until too late, it can be difficult if not impossible for the building to accommodate a solar shading solution, as we discussed earlier this year with the story of an overheating library in China.

This said, where possible, our external roller blinds effectively regulate solar light and heat without hindering the view outside, creating a space that remains cool in the Summer, warm in Winter and free from glare all year round. This transforms the environment from a previously unused space to one that can be enjoyed 365 days a year by all the family. To find out more about why you should consider solar shading for your property, check out our Guide To Solar Shading here.