Save £500 Off Patio Awnings

Save £500 Off Patio Awnings

How our motorised awnings work

Electric awnings are the most common awning type on the market thanks to their effortless convenience and simply refer to an awning that is motorised, operated at the touch of a button, instead of manually operated via a gearbox and crank handle. A sealed tubular motor is built within the rollertube of the awning, which the fabric wraps around and a standard 3 core power cable exits the motor on the desired side out the rear of the cassette casing and is either fitted with a 3 pin plug and plugged into a standard domestic socket or wired into a fuse spur.

The motor contains a built-in radio receiver and is functioned via either a handheld remote control or wire-free wall switch, with a typical range of 200m in open space or 20m through two reinforced concrete walls. When the transmitter sends a command to the awning; open or close, the motor turns in the relevant direction at a consistent speed (normally 17 revolutions per minute) ensuring a smooth operation. The motor is limited to automatically stop at the fully extended or retracted positions, however, the awning can be stopped anywhere in-between the open and closed positions by pressing the stop button on the transmitter.

A secure rolling code, that changes each time the awning is operated ensures no interference whilst built-in thermal overload protection ensures the motor does not burn out if it is consistently operated (in case a child or the family pet gets hold of the transmitter). Along with remote control or wall switch operation, the motor can also be operated via a phone app in conjunction with a smart hub plugged into the home broadband router, so wherever you are in the country or world, you can easily open or close your awning. Additional functionality included within the app includes scheduling (a timer function), so you can have your awning open or close at a pre-determined time of the day, each day of the week.

Furthermore, a range of sensors can be linked into the awning motor configuration, with the most common and recommended being a wind sensor. As the name suggests a wind sensor detects the wind speed the awning is subjected to and retracts the awning in case of high winds, to reduce the chance of damage to both the awning and your property. Sensors ‘talk’ to the motor via radio signal, in the same manner as the transmitters, talk to the motor. Additionally, the awning motor sends a ‘fail-safe’ signal to any sensors every 15 minutes to check the sensor(s) are still in place and working (ie to make sure the sensor(s) are not damaged or if battery operated the batteries need replacing). If the sensor(s) do not respond to the signal command the motor automatically retracts the awning to signal to check the sensor – clever! 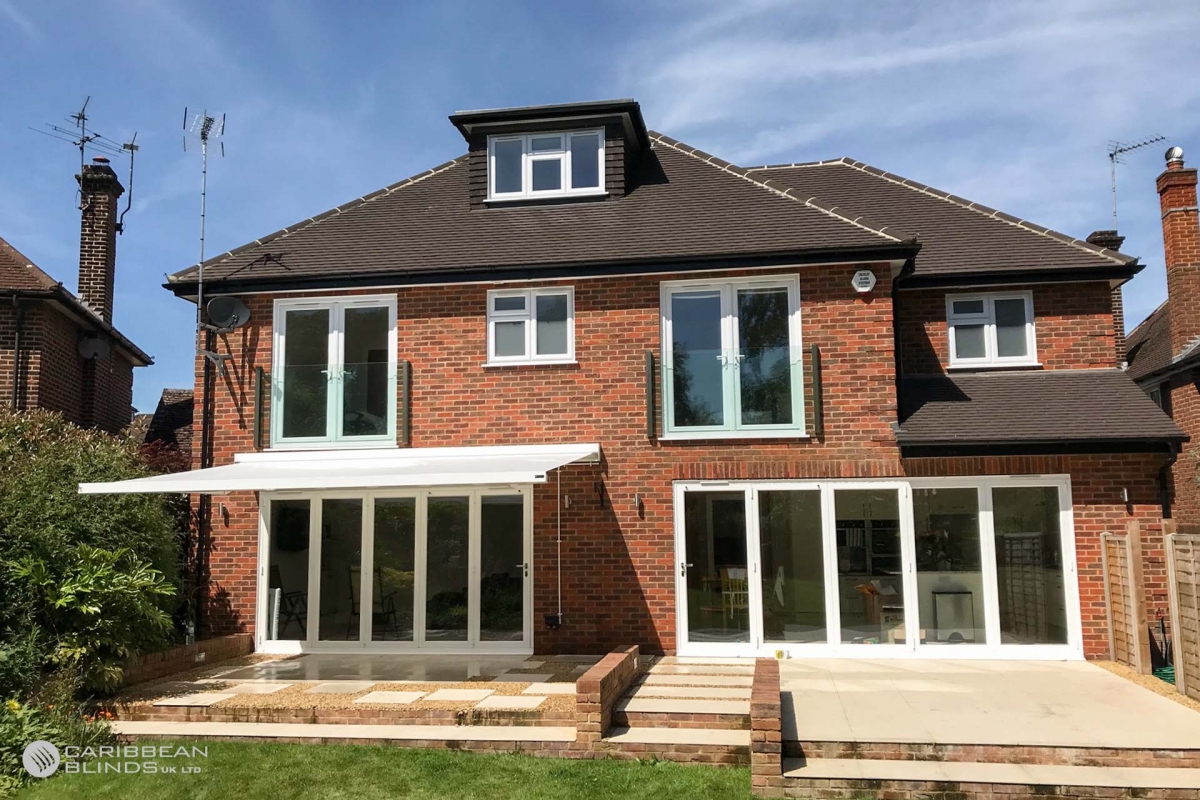 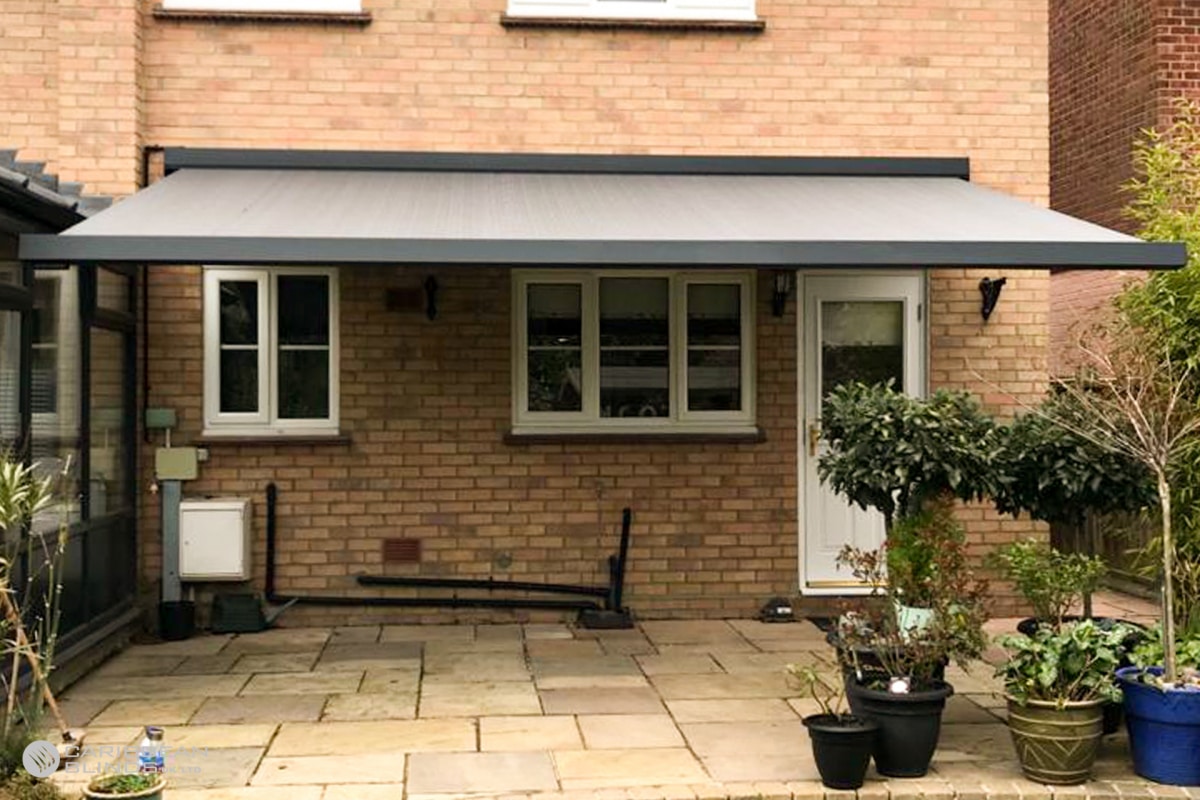 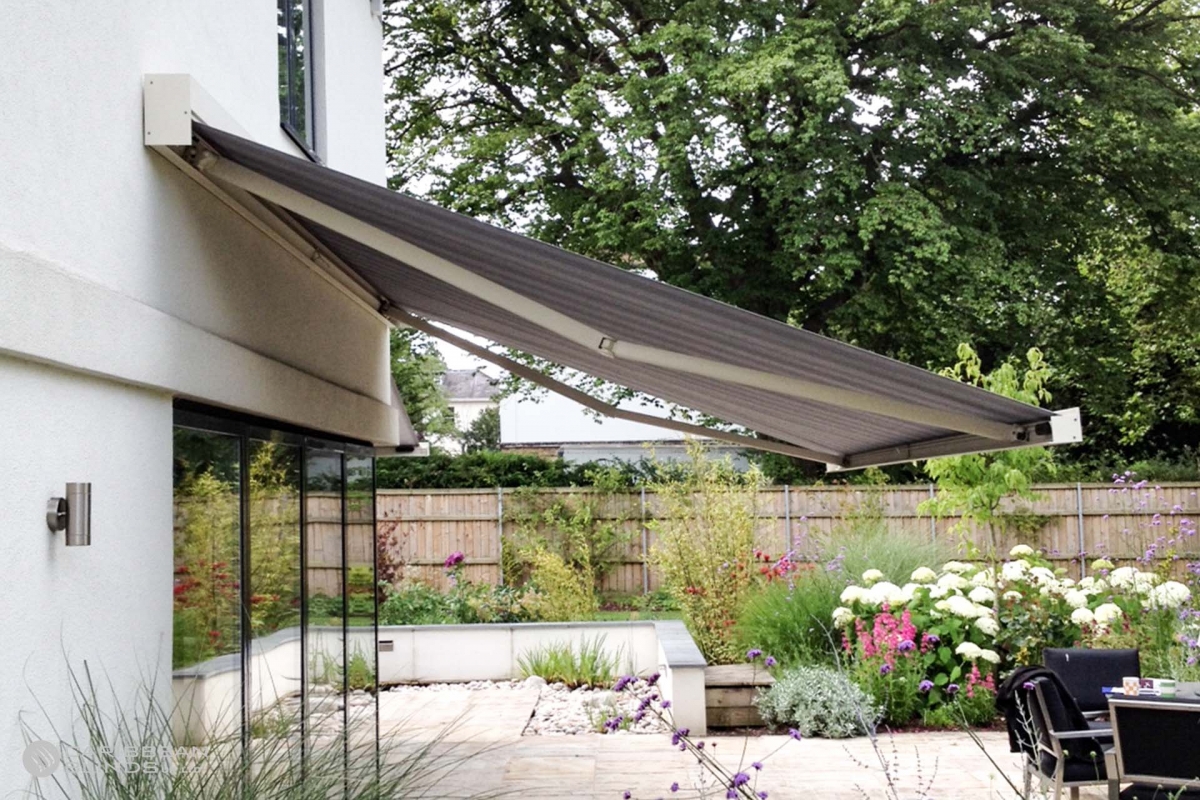 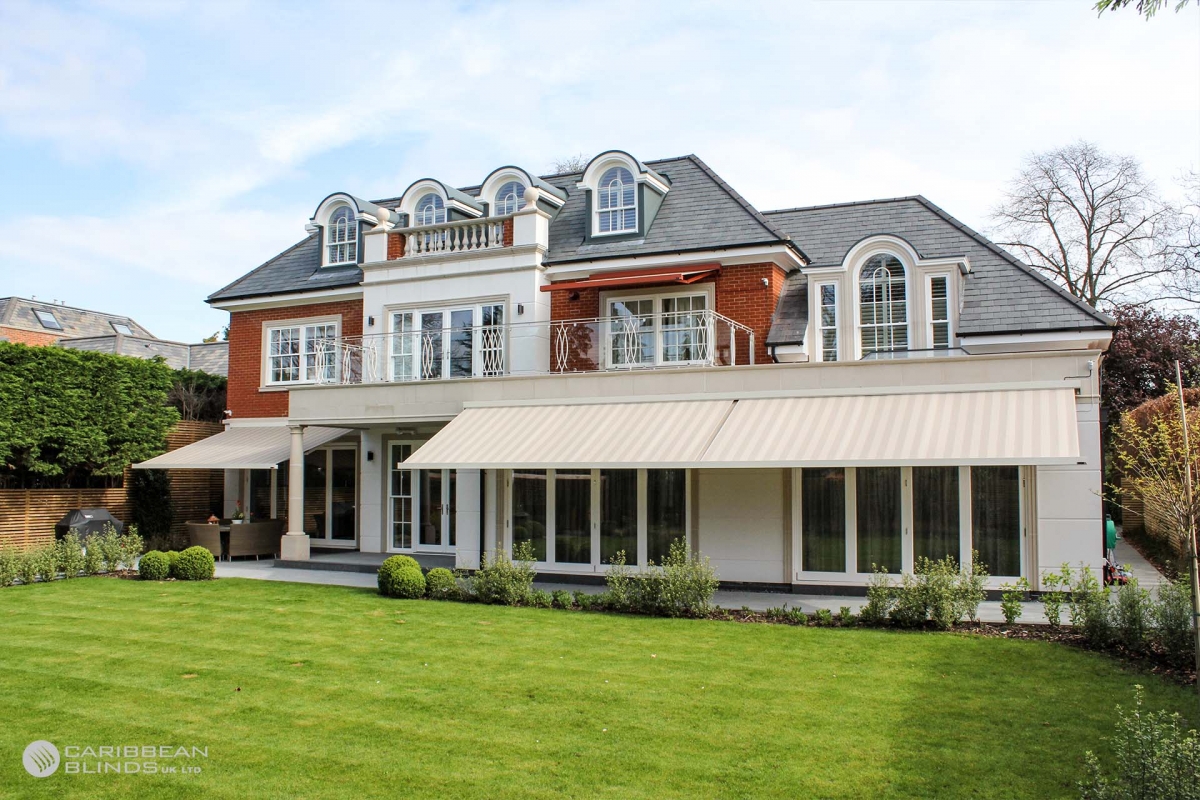 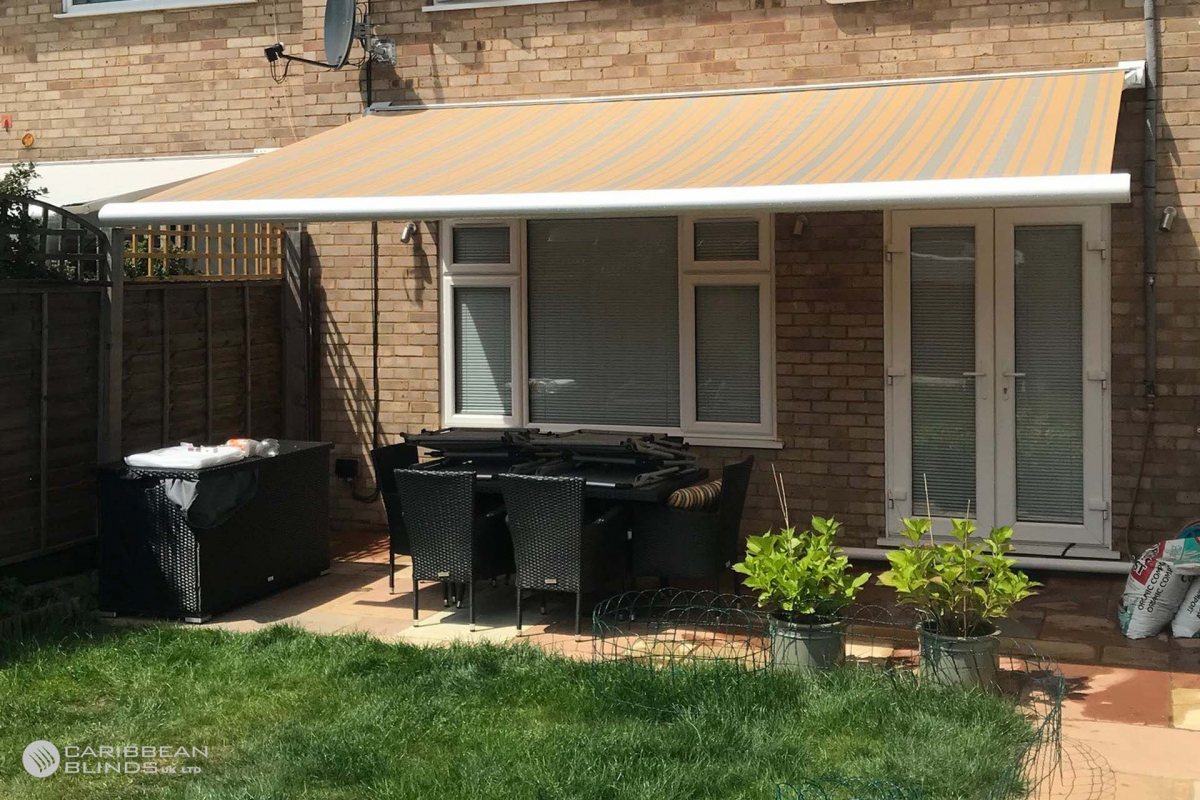 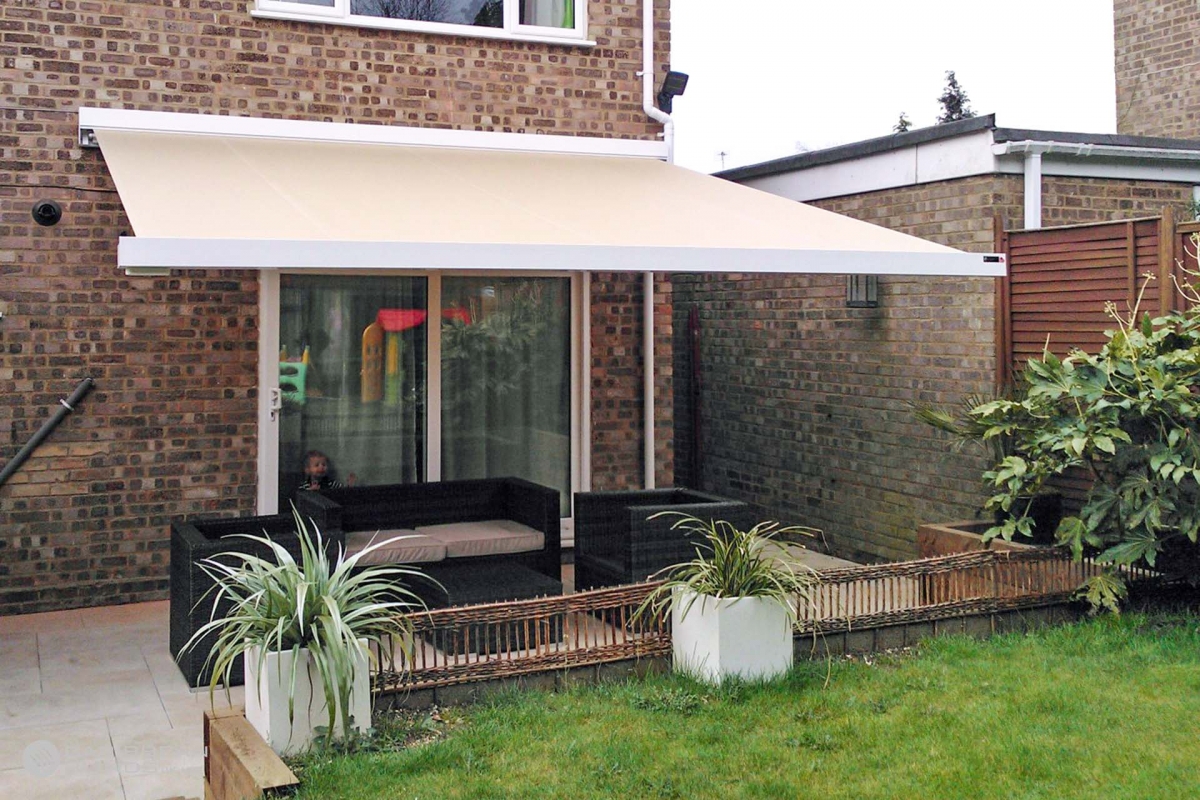 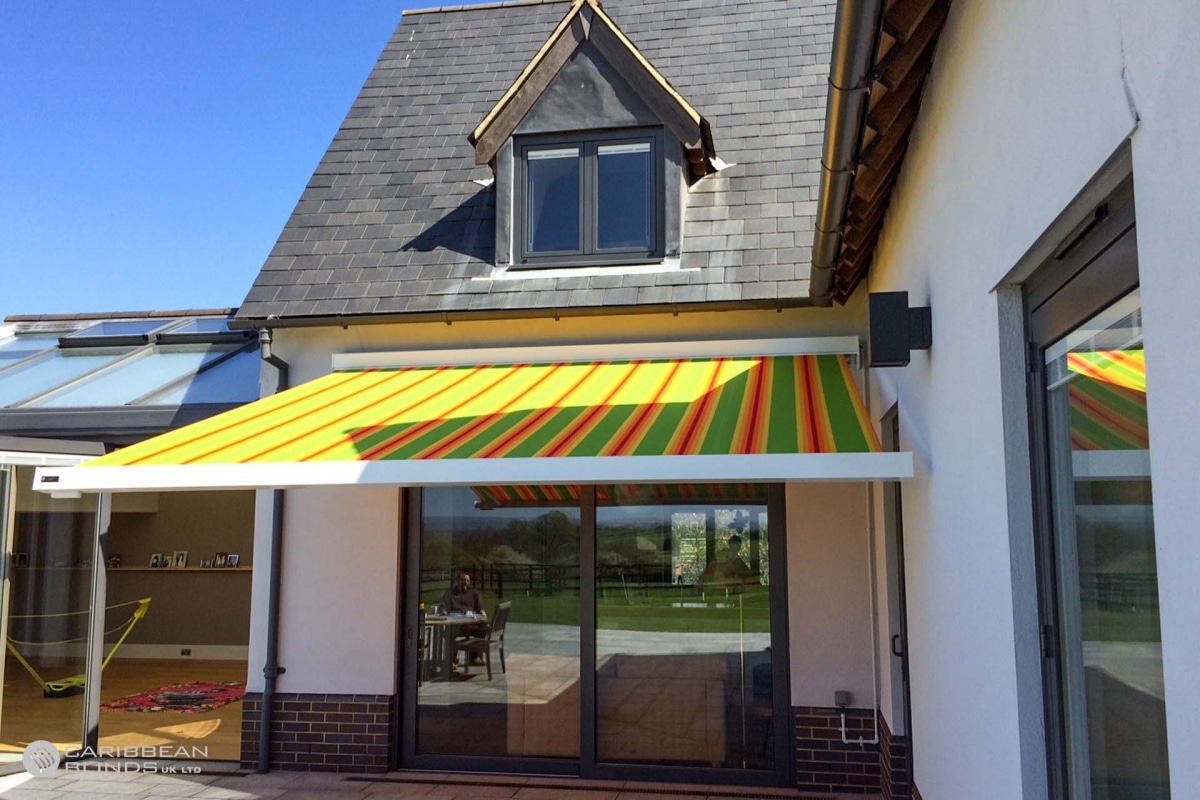 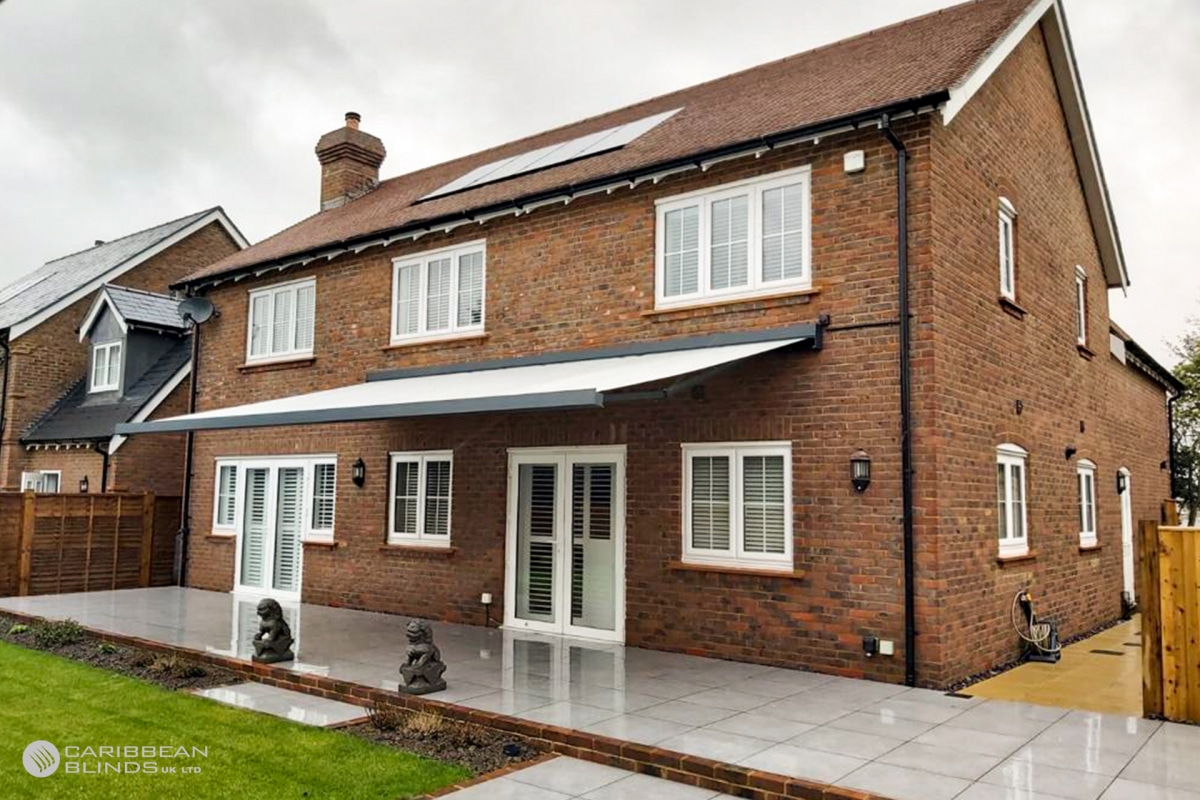 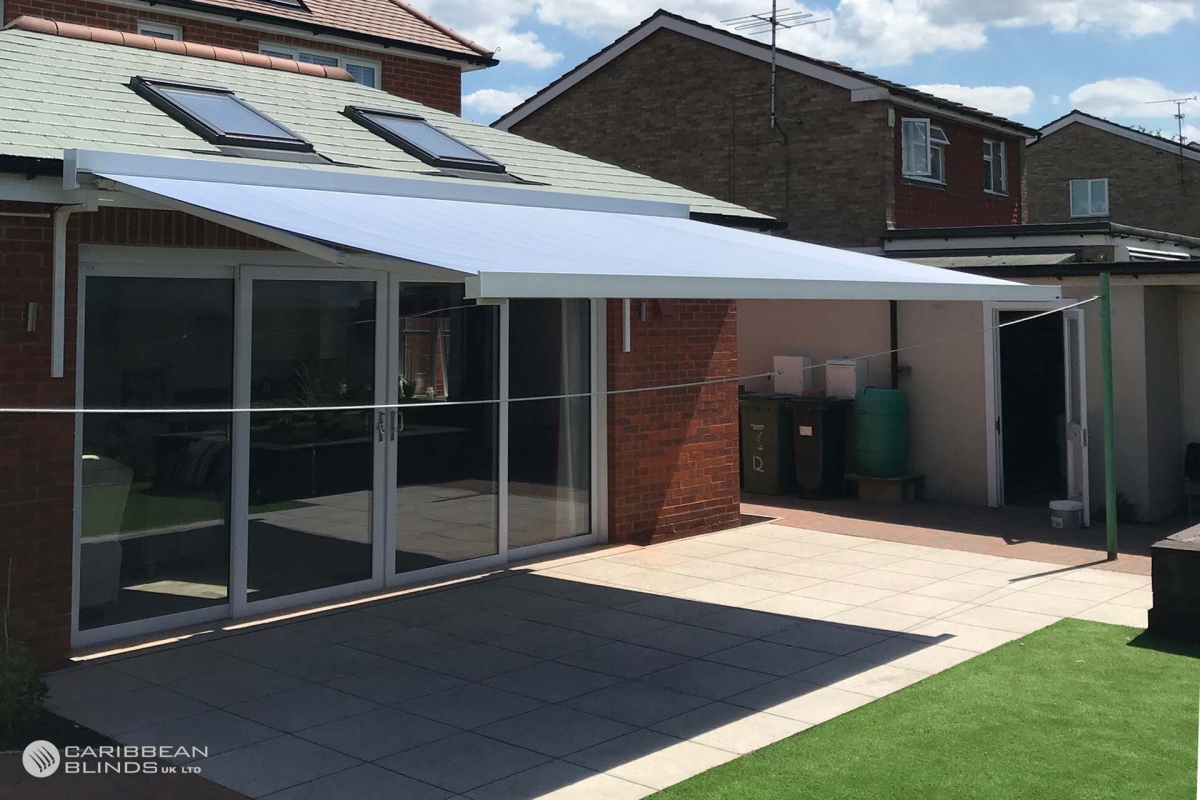 Request A Free No Obligation Estimate

WANT TO SEE OUR PREMIUM ELECTRIC AWNINGS IN ACTION? 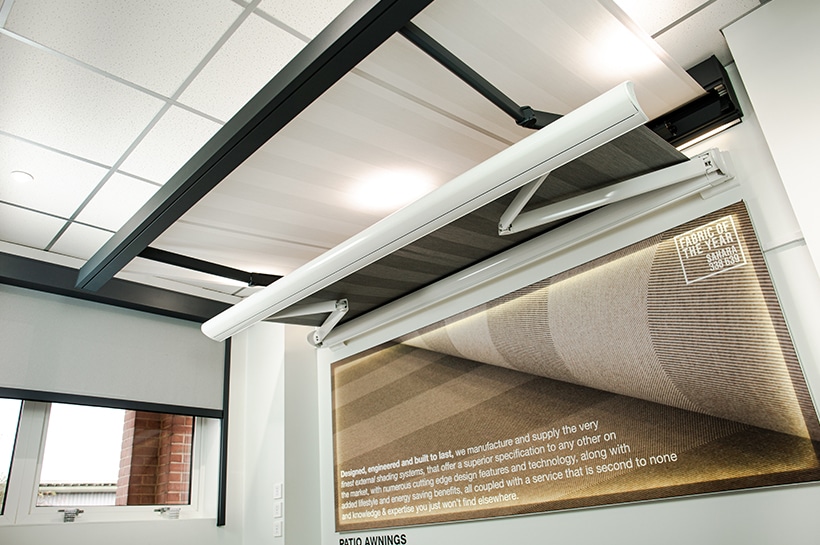 I am writing to say how lucky I was to select Caribbean Blinds to carry out the project at my house. The team were brilliant a nice group of lads and so friendly. Your office staff were great also. Had the 1st-floor awning out all afternoon as was streaming into my study. Overall 110 out of a 100… well impressed. And that is not easy to achieve from me.

The 3 gentlemen were very professional and did very well to protect the patio walking glass and tiles, despite dreadful weather. I am very happy with their job, and I am looking forward to trying it out once we are getting the scorching sun!

Excellent customer care and service from all aspects. Quick job and good quality product. I would highly recommend Caribbean Blinds.

We are very happy with our new Cuba awning and may it provide us with many years of pleasure. Your workmen were very polite, tidy and contentious, with the right amount of being sociable. Totally happy with everything from beginning to end. I know it was quite long winded but we needed to be completely happy that we was choosing the right product as it is a lot of money and there are so many people on the internet selling for a lot less. Thanks once again and we will certainly spread the word when our neighbours see it about your wonderful efficient local company.

Everything we hoped for

The canopy is everything we hoped for and came in use for the first time this weekend when we had a dinner party. We were able to sit outside until the guests departed at 2 am! Your company has been very professional throughout, at each stage and with all your staff. Even better that it’s British. I would recommend you to anyone who asked.

We are both very pleased and impressed with the installation of our awning and the professional way in which you and your team processed our order in such a short space of time. We used it for the first time today, a far cry from gazebos and parasols and looking forward to many more hours of sophisticated comfort. Many thanks for a great service and product.

Very happy with the product

Very happy with the product and the fitters – everything went very smoothly and the awning looks great.

Very impressed with the service

I am very happy with the awning, it has given our courtyard a wonderful feel, plus will provide the shade we need. I have been very impressed with the service your company has provided, right from meeting you at Grand Designs to the fitting today by two great guys who done a lovely job.

From start to finish the process was very straight forward, both efficiently, and pleasantly handled. The installers were very pleasant, good at their job and neat and tidy. I couldn’t fault them, they are a credit to your company. The product seems of good quality, albeit it is very early days yet.

All your patio awning related questions answered by our experts.