Blog
Home > Blog > Too Hot To Work
Back

Too Hot To Work

Last week’s Daily Mail reported how students in China have resorted to using their umbrellas indoors to escape the intense heat and glare of their local library. Whilst traditionally putting up an umbrella indoors is seen as an omen for bad luck, visitors to Shenzhen Library had little choice but to use their umbrellas in an attempt to keep the sun’s rays at bay.

Originally, the modern building was designed to increase natural sunlight hence its enormous floor-to-ceiling windows. However, it would appear architects completely overlooked the potential issue of excessive heat and uncomfortable interior conditions, particularly for a city that regularly reaches temperatures of 32° throughout August.

Despite the fact large windows create an inviting and attractive space, the surplus light and heat can cause a multitude of problems that severely restrict the building's practicality. Although the student’s umbrellas may provide a small amount of shade, this solution is far from ideal in terms of comfort and functionality. This said, it was revealed officials did consider the installation of blinds to control the heat, but this was deemed impractical due to the architecture of the library.

This issue highlights the sheer importance of considering the possibility of solar shading applications, such as blinds, before the building is constructed, rather than afterwards. If this isn’t discovered until too late, it can be near on impossible for the building to accommodate a solar shading solution that would effectively control the problem.

For example, External Roller Blinds would minimise both the heat and the glare by blocking up to 96% of the sun’s incoming heat radiation and therefore creating a much more comfortable and productive environment for the students to enjoy. 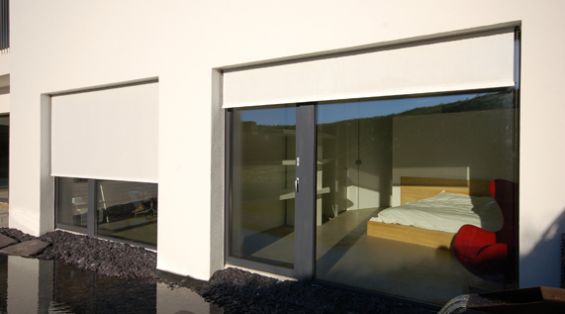