Earlier this year we published an article highlighting the issue of overheating in modern properties, where it was reported a staggering 83% of Londoners suffered from an uncomfortably hot home this Summer, with 31% saying they felt ‘tired or unwell as a result of the rising interior temperatures.’ Three months later and the concerns regarding this problem show no signs of wavering, with scientists predicting this year is on track to be the hottest year since 1880, with this trend expected to continue.

Due to Global Warming, temperatures in megacities are estimated to rise by as much as four degrees, underlining the urgency for a sustainable and cost-effective solution to this growing issue. In fact, a recent survey by Sustainable Homes concluded that 65% of individuals (some of which are social landlords) believe there is ‘real concern within their organisation regarding overheating in residential properties,’ with almost half reporting they were ‘extremely or very concerned’ about the side effects of this issue.

It would appear that despite the positive Government-sponsored initiative to build more ‘green’ homes, this scheme has created many unforeseen, but potentially dangerous problems both today and in the near future. Given there’s so much emphasis (and legislation) focussed on insulation to retain heat in the winter, the insulation of glazing to prevent unwanted heat in the summer is often overlooked. And with temperatures continuing to rise, overheating in buildings, particularly those that are so well insulated that heat can’t escape (because the building fabric is designed not to allow it), the problem of discomfort is only going to escalate.

Such views were echoed in a recent article by Max Fordham who emphasized the importance of ensuring internal property temperatures were comfortable before the construction was complete, as opposed to afterwards. This matter was also reiterated in a story from earlier this year about a Southern China library where students resorted to using their umbrellas indoors as a last-ditch attempt to provide ‘shade’ from the intolerable heat. Due to the architectural nature of the building, it could not accommodate a solar shading solution, resulting in a space that is both highly impractical and virtually unusable.

This case study highlights why it’s key to consider the possibility of retrofitting at-risk buildings with solar shading applications, such as external roller blinds, before the building is constructed rather than afterwards when it may be too late.

Whilst large expanses of glass in modern extensions, renovations and new builds create a light, bright and airy environment, renowned for boosting our ‘well-being’, as you can see this surplus amount of heat and light can cause a multitude of problems which could prove detrimental to our health. Infrared rays are at the core of this issue, as they transmit heat, raise skin temperature and generate warmth, contributing to half of the sun’s energy as demonstrated in the diagram below.

Essentially, the hotter an object, the more radiation it emits. For example, when radiation strikes glass, such as a conservatory roof, some of the sun’s heat radiation is trapped. This then causes indoor temperatures to rise significantly, hence the demand for solar shading solutions to block this radiation and restore much cooler and comfortable interior temperatures.

In fact, our external roller blinds (shown below) outperform any other interior shading device by blocking up to 96% of the sun’s incoming solar heat radiation, to create an air conditioning effect, along with effectively regulating light (glare) and UV rays as demonstrated in our informative animated video. 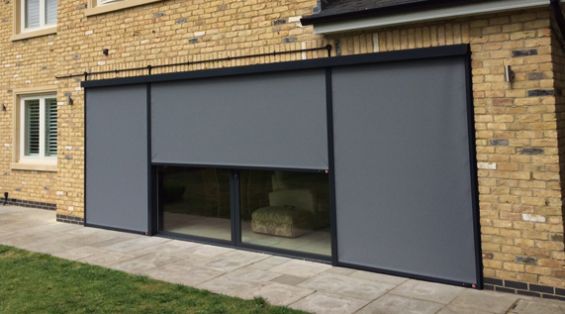 As the UK’s only external shading specialist having supplied and installed thousands of external blinds for ‘eco’ homes, including the first certified Passivhaus in England, we’re proud to provide genuine expert advice, for comfortable, healthy indoor spaces that can be enjoyed 365 days a year. To find out more about our innovative shading systems, complete our quick enquiry form today and one of your specialists will call you back to discuss your requirements in greater detail.

With Christmas now a distant memory (albeit it was only 2 weeks ago) our thoughts turn to Summer and in particular our gardens. With longer than usual lead times, due to the ongoing…

The end of the year is fast approaching, with just 10 days until New Year.  As in 2020, the outdoor living and solar shading industry has seen tremendous growth. The pandemic with its various lockdowns, restrictions and travel bans has meant we all continue to invest in our…

We are delighted to announce that our Managing Director, Stuart Dantzic, has joined the judging panel for the Family Business of the Year Awards 2022 along…